The KQi3 Pro is an “SUV” scooter: durable, dependable, and comfortable on longer rides

NIU’s KQi3 Pro is way ahead of the pack when it comes to reliable, high quality commuter electric scooters.

High-quality commuter electric scooters for under $1000 live in a crowded field where competitors like Segway, Apollo, EMOVE, Fluid Freeride, Gotrax and others duke it out for market share with many similar features and specs. One company, NIU (pronounced “New” outside China) is hardly new to the world of electric micromobility – they started making electric vehicles, including mopeds and motorcycles, in 2017. NIU’s ingenuity and experience show in their KQi3 Pro, the “SUV of electric scooters,” as they call it.

Despite sharing many similar tested specs with electric scooters made by the brands above, the KQi3 Pro really distinguishes itself with exceptional build quality and reliability – and with certain features only found on NIU scooters. It may not beat out the widely-praised Segway Ninebot Max overall for speed, range, and portability, but for $100 less, the KQi3 gives the Max some serious competition as an affordable commuter electric kick scooter — and it comes out ahead in some key areas.

Check out this video review of the NIU KQi3 Pro from ESG. 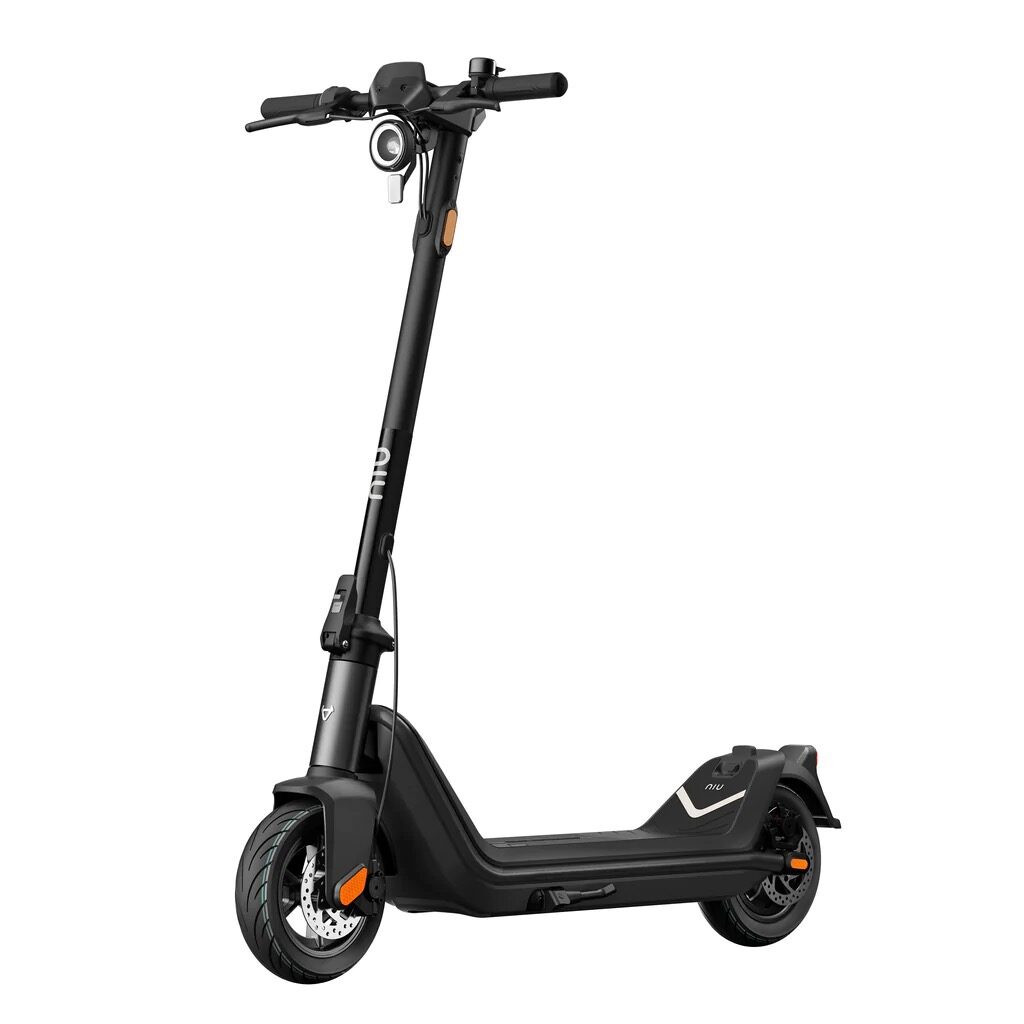 NIU’s KQi3 promises and delivers several improvements over the less expensive KQi2 – a great electric scooter in its own right. These include a larger battery for increased range, a more powerful 350W single rear motor for more speed and power, and dual mechanical disc brakes, unheard of at this price, for improved braking control. It retains, thankfully, the same outstanding warranty.

Some improvements over the KQi2 come at a weight cost, but the KQi3 Pro’s 45 pounds (20.4 kg) still doesn’t feel like too much to lug onto public transit or into the trunk of a car. And while weight-saving 9.5-inch tubeless tires don’t offer quite as much shock absorption without suspension, opting for lower tire pressures can make this scooter a very comfortable daily ride over the odd rough patch of road, paved tracks, or occasional light gravel. NIU calls it their SUV scooter, but the KQi3 Pro is a surprisingly quick little beast for a mid-range commuter scooter, with enough power to climb hills without a significant loss of speed, a set of dual mechanical disc brakes that perform a little more like hydraulic brakes, and a wide, rubberized deck and rider weight rating that make it a good choice for larger riders.

NIU claims a top speed of 20 mph for KQi3 Pro electric scooters sold in the United States. Those made for other parts of the world don’t have a speed governor installed in their firmware, and the company claims they can achieve a full speed of 25 mph. Real world tests have put it at around 18.6 mph. The average max speed for scooters of this class is somewhere around 18 mph, which places the KQi3 ahead of the curve.

In independent tests, a governor-enabled KQi3 Pro reached a speed of 15 mph in a little over five seconds. This is faster than competitors like the Apollo Air Pro, Segway Ninebot Max, and ANYHILL UM-2. (On the other hand, the comparable EMOVE Touring hits 15 mph in 3.9 seconds.) Overall, the KQi3 Pro is surprisingly quick compared to others in this class.

As we noted, the KQi3 Pro packs a few more pounds than its smaller sibling, the KQi2 Pro. Much of this weight can be found in the larger 486Wh battery, which boosts the scooter’s tested range to a respectable 21 miles – longer than most comparable scooters, though still a full 10 miles shy of the company’s claimed 31 miles, only achievable on the very low-speed eco mode setting. 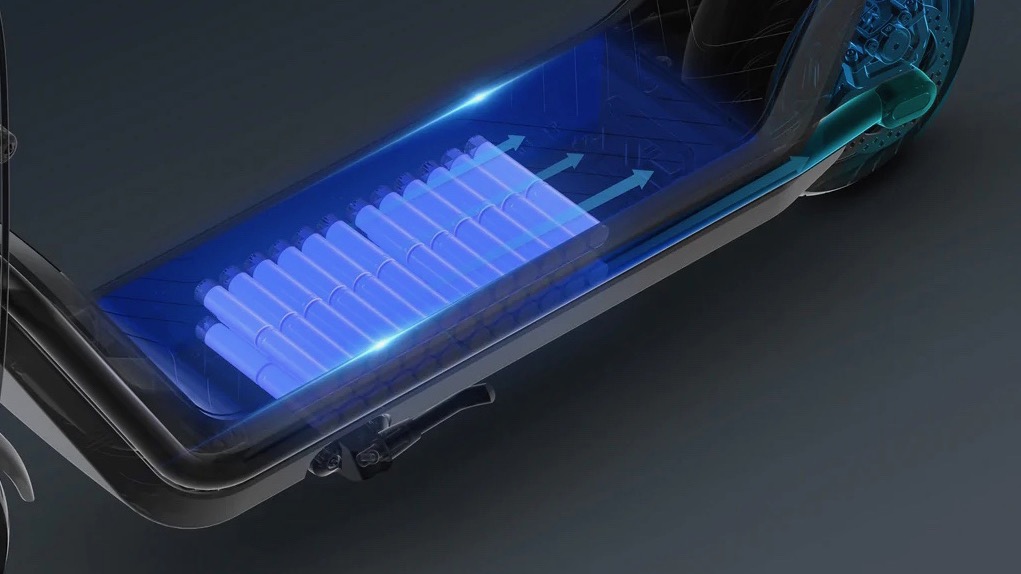 The KQi3 uses the same configuration as the KQi2 – a single rear-wheel-mounted brushless motor. But the extra 50 watts in this version, with a maximum output of 700W, significantly affects its speed and hill-climbing abilities. It’s almost 50% quicker than the KQi2, 25% faster on hills, and goes toe-to-toe with the Segway Ninebot Max when it comes to both acceleration and hill climbing speeds. 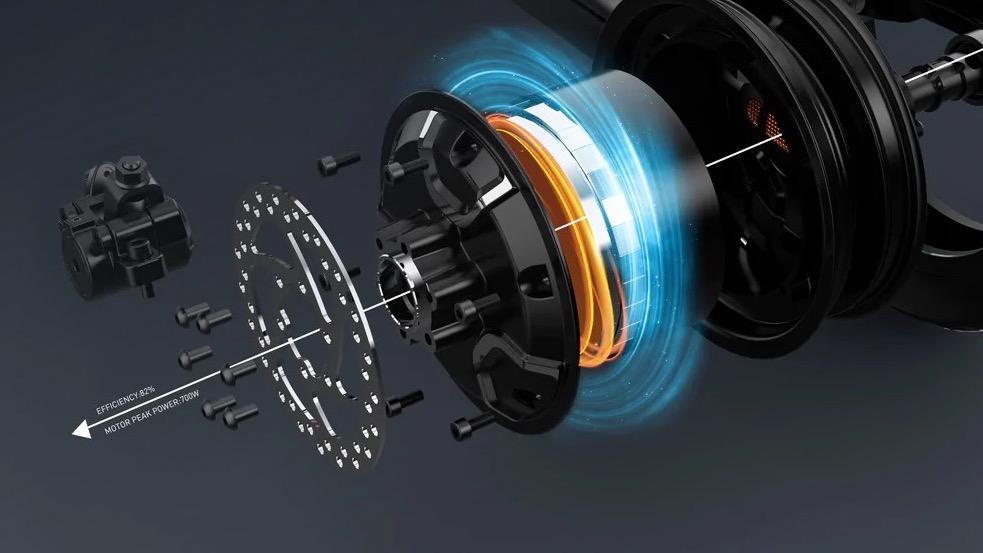 Like all of their vehicles, NIU’s KQi3 Pro has been built and engineered for durability and daily use. The company’s investment in making workhorse vehicles shows in the design of the KQi line, and their commitment to quality construction is evident in the fit and finish of the scooters, and NIU’s 2-year warranty. 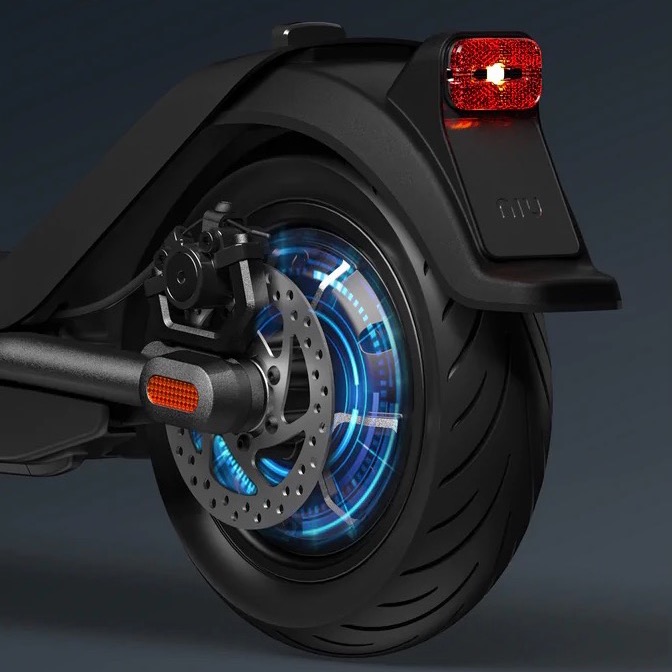 The KQi3 Pro has smaller tires than its predecessor, which can make for a slightly less comfortable ride. The KQi3’s tires are slightly wider, however, to compensate for its slightly wider deck, and since they’re tubeless, like the KQi2’s, they can be run at lower pressures for more dampening. Pneumatic tires cannot substitute for proper suspension or shock absorption, and neither the KQi2 or KQi3 builds are suited for curb-hopping, in any case. They’re well-built commuter scooters, and in that niche they succeed excellently When kept to mostly well-graded pavement, NIU’s electric kick scooters make for a smooth and comfortable ride, even without suspension. 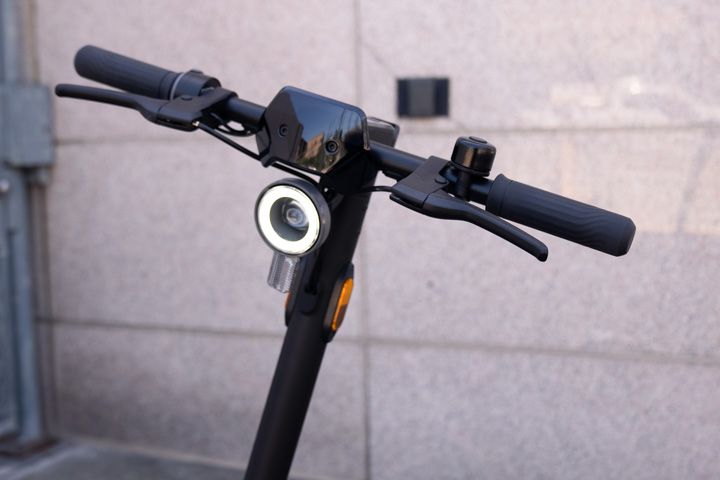 NIU has innovated electric scooter lighting with a white ring of always-on LED lighting around the headlight that functions as a driving light and improves visibility significantly, Yet another measure of the company’s commitment to rider safety, the “halo” light, as they call it, comes standard on all scooters in the KQi line, along with a bright LED headlight mounted high on the stem, very well-placed reflectors, including one just below the headlamp, and a fender-mounted tail light that also functions as a brake light. 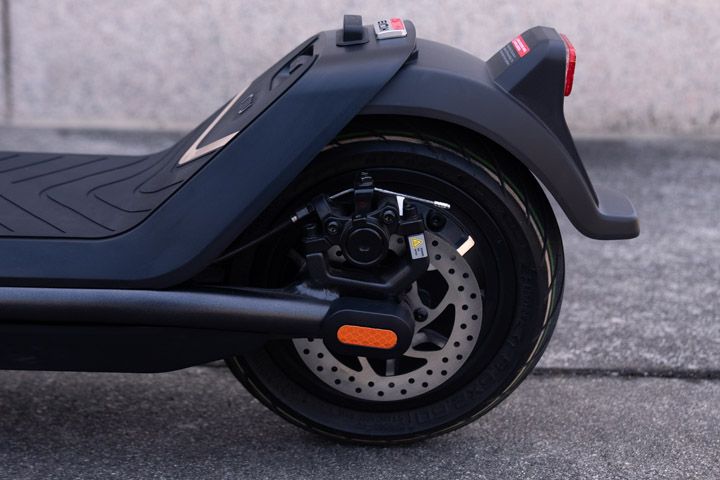 Regen braking for more range combines with dual disc brakes for strong braking power that feels fully in control, even when coming to a stop from high speeds. So far, the NIU KQi3 is the only electric scooter on the market to offer dual disc brakes for under $1000 in addition to regenerative braking.

NIU goes even further toward providing just the right amount of braking power with calipers that squeeze both brake pads equally toward rotor, instead of just on one side like most mechanical brakes. This makes the KQi3 Pro’s disc brakes perform more like expensive hydraulics.

The NIU KQi2 Pro is an easily portable electric scooter with a top-notch folding mechanism that locks firmly into place when the stem is up, with no noticeable weakness in this area at all.

And while we wouldn’t consider 40 pounds especially light, most people will have little difficulty lifting the electric scooter to store it in the car or carry up a flight of stairs or two.

Large, 10-inch air-filled tires not only give this electric scooter a plush ride, but they’re tubeless, which makes them all the better. Tubeless pneumatic tires are less prone to pinch flats, giving you more confidence to roll over occasional road debris or potholes.

Tubeless tires can also be run at slightly lower pressures, which makes for an even softer, cushier ride if the roads near you aren’t the best maintained. These tires have traction enough for wet conditions and the NIU KQi2 Pro won’t slip in light-to-moderate rain. 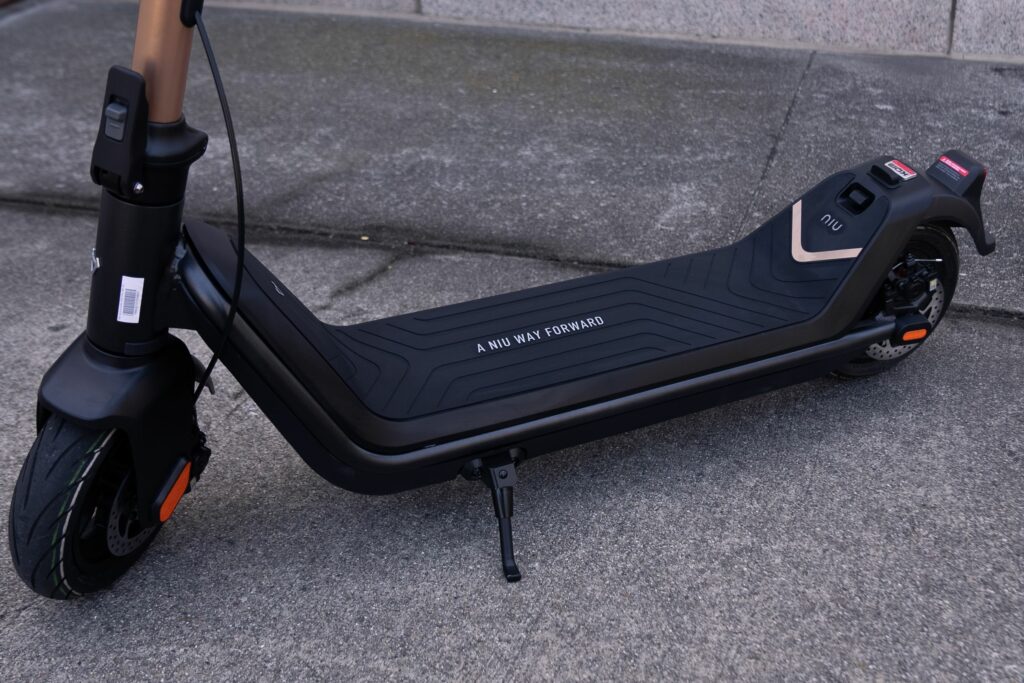 The KQi3 Pro has plenty of space for larger riders with wider stances on its grippy, rubber-covered, 20 in x 7 in deck. Three inches of ground clearance makes for a low center of gravity and contributes to the e scooter’s overall feeling of stability on the road. Keep your Pro looking great and avoid curbs so as not to scratch the deck and ruin this scooter’s sleek black finish.

The simple design of NIU’s cockpit makes it easy to focus on the road instead of the screen. The KQi3 Pro dash shows large, pixelated numbers for speed and five asterisks for battery life. At the bottom, just above a multi-function physical power button, the display shows which of the preset three gear modes (or additional custom mode) the scooter is currently set to.

At the top are four color indicators for lights, Bluetooth, temperature, temperature, and fault warning. Like the KQi2, the dash is bright, even in sunlight, and gets a further assist from a tinted shade placed in front of it. 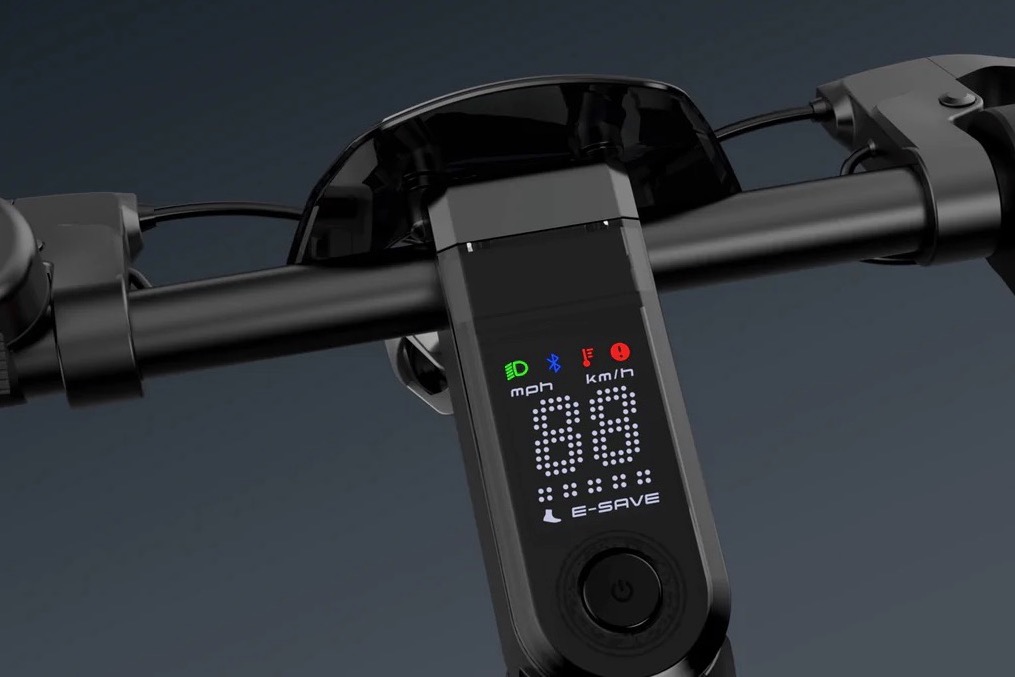 The KQi3 Pro, like all NIU’s scooters, has an IP54 water resistance rating, which makes it suitable for riding in light rain. It should not, however, ever be ridden in heavy storms or through puddles since submerging the scooter in water could render it fully inoperable. 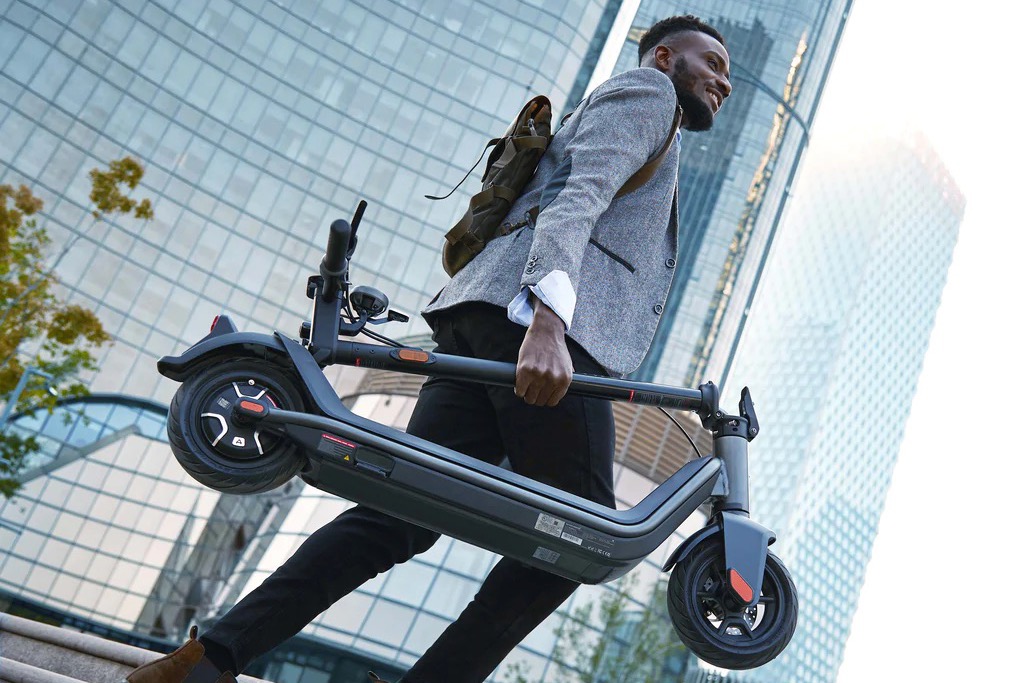 NIU’s warranty is best-in-class, or was when it was first offered with the company’s KQi2 Pro. Now other companies are also offering 2-year warranties on all major parts, perhaps inspired by NIU’s customer successes. These are well-engineered and well-built electric scooters that demonstrate NIU’s expertise in building electric vehicles.

This is not an “issue,” but something for buyers to know: First time users will have to connect their scooter to the app, walk through a tutorial, and learn to ride in the slowest “eco save” mode before unlocking the top speeds. This might seem like overkill but it protects NIU from liability claims — in the event of an accident — that novice riders weren’t given instructions on how to ride safely. It also lessens the chances that such riders will have an accident.

The KQi3 Pro may require some minor adjustment to its disc brakes to get them working perfectly, and the scooter’s tire pressure should be checked regularly and the tires topped off when necessary. Otherwise, the Pro should require very little maintenance other than keeping it clean and dry.

KQi3 Pro: Is it worth the money and is it worth buying?

The NIU KQi3 Pro fulfills the expectations of an “SUV of electric scooters” in the best possible ways – by being durable, dependable, comfortable over long rides, and fast and powerful enough to get the job done, if that job is an everyday commute or local errand run. It’s not built for the racecourse or the trail but it’s also a serious electric vehicle that doesn’t ever feel like a toy or novelty because of its exceptional built quality.

The KQi3 Pro is built so well, in fact, that NIU is willing to stand behind all of the scooter’s major parts with an outstanding 2-year warranty. It’s not the perfect scooter, no such thing exists, but it’s got more to please a wider range of riders than most in the under $1000 category and is without a doubt an excellent value for the money.

You can improve your KQi3 Pro with the following accessories: 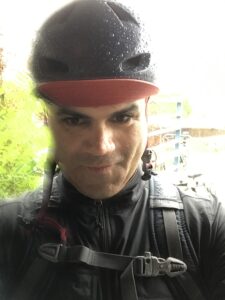 Josh is a writer, electric vehicle fanatic, avid cyclist, and all around gearhead.