Technology has taken the world by storm in the last decade or so, especially in the transport industry. From electric cars to motorised outdoor equipment such as hoverboards, electric bikes, and electric scooters, moving around has become more accessible. However, amidst the excitement and joy of riding these motorised gadgets comes the issue of unexpected fires.

The world may be going crazy about electric scooters. Still, the several significant incidents involving scooter fires have made people wonder whether they are bound to bring more harm than good. Since the wave of modern electric scooters started in 2009, we’ve witnessed a handful of these gadgets burst into flames.

Let’s find out why e-scooters catch fire and how this can be prevented. We’ll also delve into the issue of battery failure, as this is where most electric scooter fires originate. 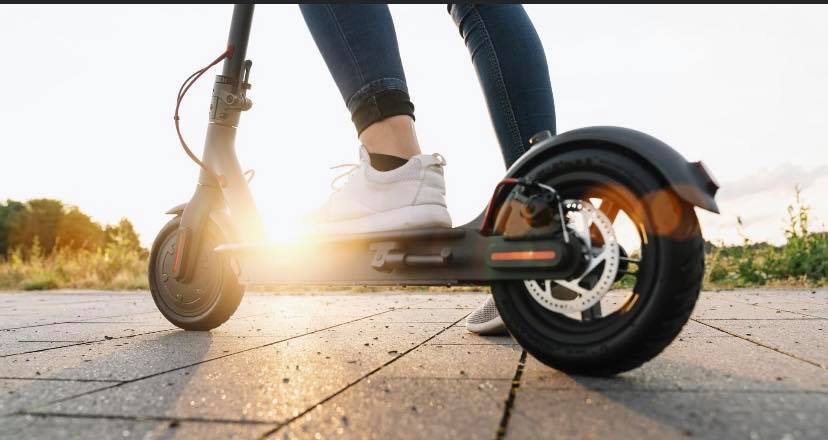 Overall, the rechargeable batteries in the e-scooters are the primary source of the fires. With the demand for electric-powered machines increasing every day, companies have developed rechargeable energy storage systems that are ideally suited for automotive applications. However, these storage systems need to be lightweight, inexpensive, and durable for improved efficiency and portability.

While nickel-cadmium, nickel-metal hydride, and lead-acid batteries are best suited for portable gadgets, lithium-ion batteries are a more popular choice. This is because they are lightweight, relatively affordable, can last for more extended periods between charges, and are environmentally friendly. You can read about the differences between lithium-Ion batteries and sealed lead acid batteries.

On the downside, these scooter batteries have been responsible for the vast majority of tragic scooter fires. This is not to mean that they’re any less safe; it’s just because failures are bound to happen in an industry that’s still in its early stage of growth.

To understand why lithium-ion batteries have an increased fire risk potential, we need to dissect their anatomy and find out how they work. Fires may occur when the e-scooter is charging when it’s in transit and even when it’s sitting idle.

However, on most occasions, fires or explosions have something to do with the battery.

Like the rest of the batteries, a lithium-ion battery comes with three fundamental components; a cathode, an anode, an electrolyte and a separator. The battery’s negative side, known as the anode, comprises a graphite matrix coated with a lithium compound. It also has a current collector that’s often made of copper.

On the other side is the positive side known as the cathode, and usually made of cobalt oxide or other flammable materials such as sulphur, iron phosphate, or manganese oxide.

Then there’s a liquid electrolyte and a thin layer of polypropylene or polyethene, which separates between the anode and the cathode. This layer selectively allows the lithium ions to move from one side to the next to create the powerful voltage needed to power an e-scooter. Depending on how much power is required, scooter batteries can have one or multiple power-generating cells.

When in use, the positively charged lithium atoms (lithium ions) in the negative (anode) side move through the electrolyte via the separator to the cathode. Those that can’t go past the separator move into the current collector and then go through a circuit that powers the device. The process is reversed by recharging the device.

How What Causes Lithium-Ion Batteries To Ignite A Fire Or Burst Into Flames? 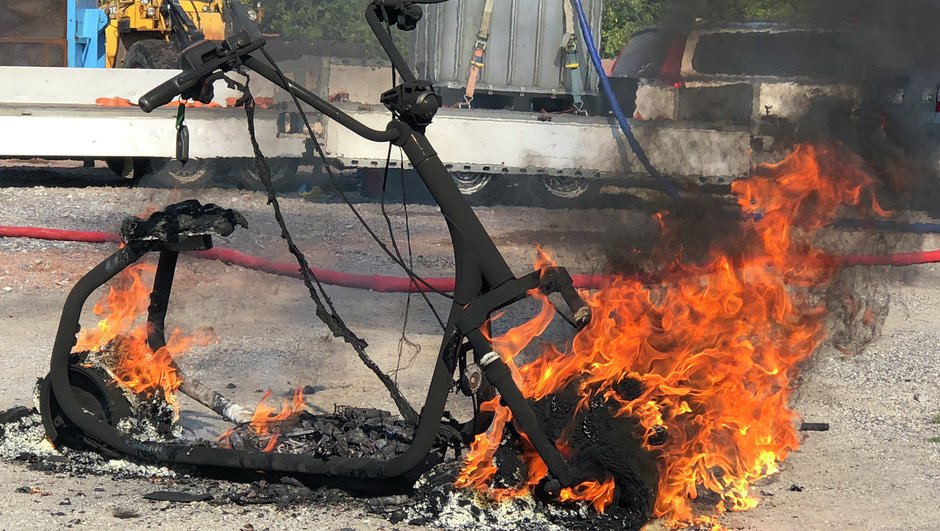 Having explained the mechanics of lithium-ion battery technology, let’s now look at common triggers that cause it to explode or catch fire.

One of the leading causes of e-scooter fires is battery failures. The catastrophic loss of a part of a battery or battery cell can cause a fire.

As with any industry, there are unscrupulous e-scooter companies that are only interested in making profits. Some of them make their batteries using low-quality materials and fail to participate in proper quality control inspections.

During the manufacturing stage, debris or welding burns may find their way into the battery’s electrolyte. As the lithium-ion cells expand and contract when energised and de-energised, the debris may react and porous the separator. This often leads to a short circuit that causes a lot of chemical reactions.

These reactions may produce more heat and gas pressure than the battery cells can dissipate, causing what is known as thermal runaway. If not properly vented, the battery starts to self-heat in a runaway reaction that can produce enough heat to ignite materials near the battery or even cause an explosion.

While the other types of batteries also experience thermal runaway, lithium-ion batteries are potentially more prone to combustion since they store large amounts of energy in relatively small storage systems.

One of the common causes of fires in electric scooters is physical damage to the battery. Although most lithium-ion batteries are encased and enveloped within the scooters framework, constant hits and knocks can damage the battery.

Some manufacturers claim that their e-scooters are designed to take extreme abuse. However, if the hits and shocks crush, puncture or mechanically damage the battery, they can lead to a short circuit. This, in turn, causes heat and gas build up triggering a thermal runaway in battery cells.

Riders should understand that physical damage to the battery may immediately trigger a fire or cause a defect that ignites a fire later. Most manufacturers take physical damage seriously and would eliminate any damaged or dropped batteries during the manufacturing stage. They also encourage users to change their batteries regularly, especially if they display signs of physical damage.

Lithium-ion batteries are designed to operate within safe and predetermined minimum and maximum potential charge levels. To ensure that the optimal energy levels are maintained within a specified amount of time, high-quality batteries come with internal controls, often indicated by the manufacturer in the battery specifications section.

Even so, sometimes, the internal controls fail to work, and limits are exceeded. Rapid charging or overcharging may cause the battery to go past its charging limit, thereby degrading the cells performance or rendering them useless.

Overcharging may occur when you use the wrong charger or when it breaks down, causing the cell voltage to be incorrectly determined by the control system. An overcharge can cause the anode material to accumulate lithium metal deposits, which pile to form metallic figures referred to as dendrites.

These deposits may continue to grow until they penetrate the separator, leading to an internal short circuit. This, in turn, triggers thermal reactions that cause the battery to explode or ignite the nearby materials.

Exposure to High or Low Temperatures

Thermal stability is another limiting factor when it comes to lithium-ion cells. High temperatures initiate internal degradation and cause exothermic reactions that may cause battery problems.

When the temperature in the surrounding is higher than the battery’s internal temperature, cells start to get heated. Once the internal temperature gets to a certain level, it triggers a reaction of the cathode with the electrolyte. This leads to the production of more heat energy leading to increased pressure above the standard limit. In response, the cells begin to yield to the pressure by spilling content that might catch fire or even explode.

While tests are designed to assess how much temperature a battery can withstand, no one truly knows if most electric scooters lithium-ion batteries undergo such tests. To be safe, avoid keeping your machine in places with extreme temperatures.

Besides increasing internal reactions that may initiate a thermal runaway event, high temperatures can make a cell fail and spread heat further within the lithium-ion battery pack. This may lead to the formation of flammable gases that cause the battery to swell and even ignite.

What Are The Odds Of An E-Scooter Catching Fire Or Exploding? 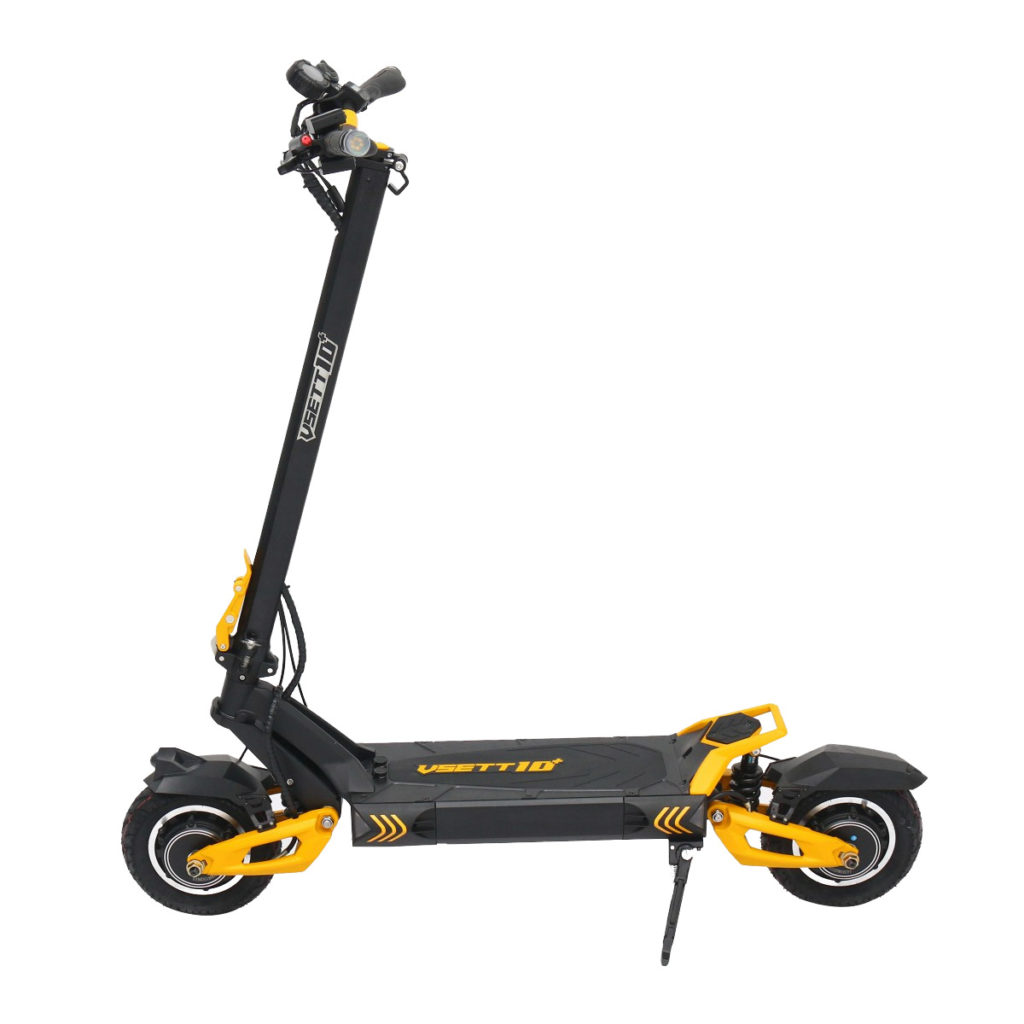 Currently, there’s no definite figure of how many e-scooters caught fire in the past few years. However, considering that approximately 200,000 e-scooters were bought in the UK in 2020 and looking at the e-scooter fire videos posted online, you can bet that these horrific incidents are a reality.

With the increasing growth of electric scooter use in the UK and worldwide, we shouldn’t expect lithium-ion battery fires and explosions to cease unless a feasible and workable solution is achieved.

For starters, the industry should set strict standards that all lithium-ion battery-operated scooters adhere to. If this is not done, there’s still a possibility that an electric scooter will ignite or explode when it’s being charged, ridden, or stored in the house.

Should I Be Worried?

While a handful of internet videos show e-scooters bursting into flames and causing severe injuries, there are still millions of others that are operational. So, if you buy from reputable brands that have not had any battery-related issues in the past, there’s a chance you’ll never experience such. Some of our most recommended brands include Dualtron , E-Twow and Segway-Ninebot scooters.

Keeping off from deals that seem too good to be true is also essential. If you go for an e-scooter priced way below others in the market, the chances are that several performance tests and security codes were bypassed.

Also, it is crucial to conduct rigorous research before you purchase an electric scooter. For example, make sure that you contact relevant manufacturers to get proof that proper procedures were followed during the e-scooters design and development process.

More importantly, get information on the best electric scooters from reputable sources such as scooter.Guide.

Thousands of scooters have been purchased with only a very minor amount having these issues.

How To Prevent Electric Scooter Fires 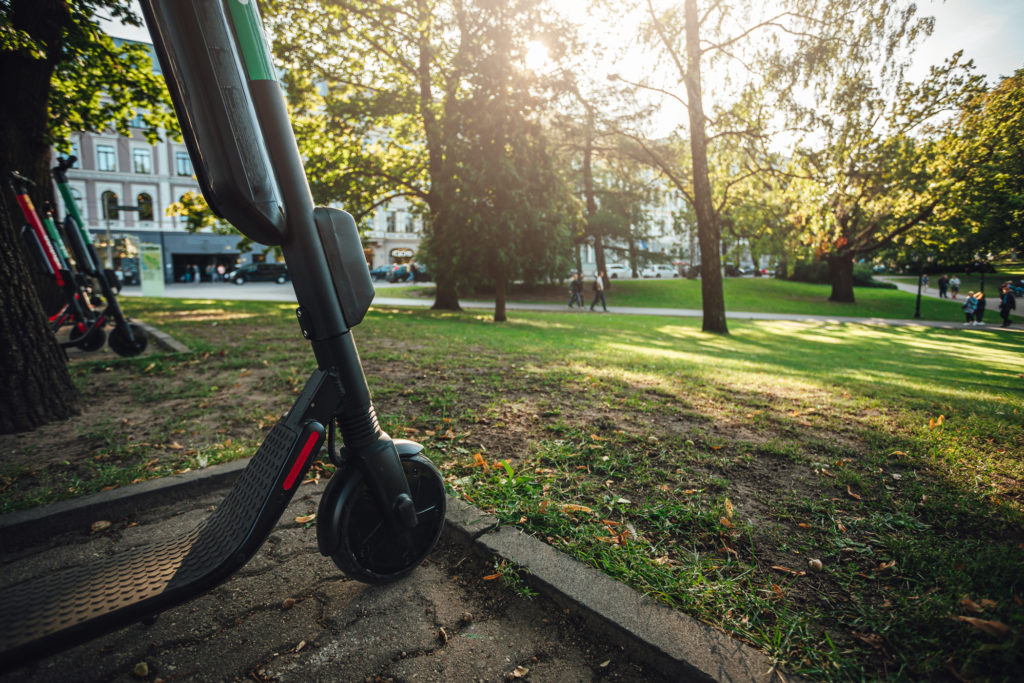 However, until these solutions become a reality, you can prevent e-scooter fires by:

Buying branded electric scooters and their accessories from reputable sources

Procuring your electric scooter and all its components, including the replacement charger, from the manufacturer ensures that you get top-quality products. Furthermore, if the machine explodes or catches fire, you can hold them accountable and even get a free replacement in cases of recalled scooters!

One of the leading causes of fires in electric scooters is overcharging. Avoid leaving your machine on the socket unattended, and also remember to use the correct charger.

Replace your battery and the electrical system regularly

The electrical system needs to be maintained, replaced and tested regularly. Faulty batteries are a fire disaster waiting to happen. While at it, make sure to get your accessories, including the replacement batteries, from the manufacturer or a reputable seller.

Don’t use batteries that have been punctured, crashed, dropped, or damaged

The battery may seem ok on the outside, but if one of its cells is worn out, it may cause a short circuit and lead to a fire.

Avoid leaving your e-scooter in areas with extreme temperatures

For example, don’t leave your e-scooter out in the sun all day long or put it in the kitchen.

Don’t put your scooter under too much pressure and tension

While some e-scooters are meant for off-roading, exposing them to lots of abuse can damage the battery and destroy their internal components, triggering a fire. 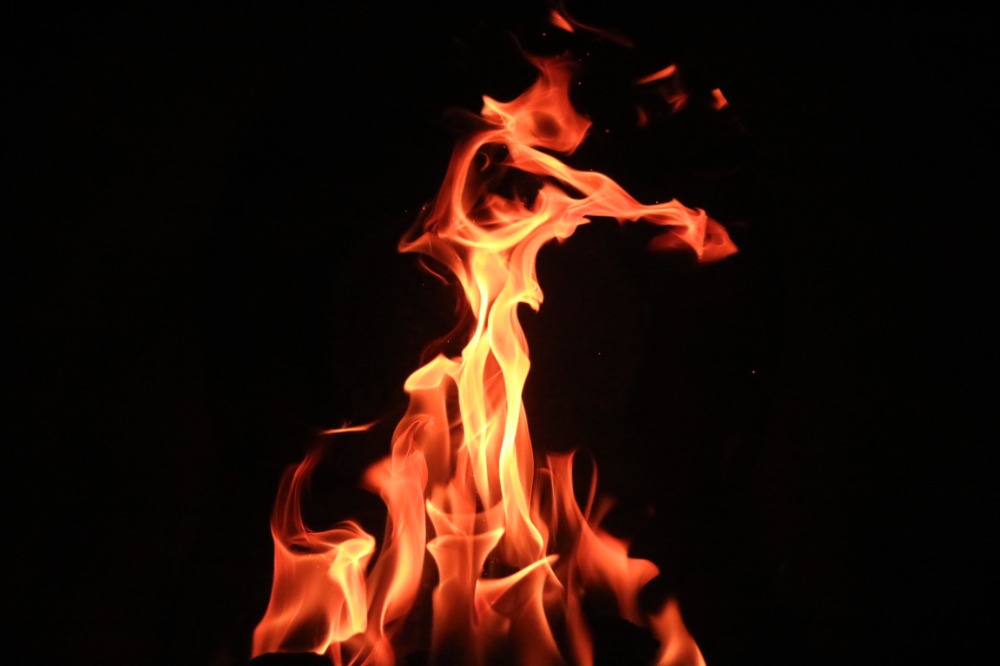 The risks of an electric scooter catching fire or exploding, like other devices that are powered by a battery, remain a reality. However, this shouldn’t put you off from buying that incredible machine you’ve been thinking about.

As we’ve explained in this detailed guide, there are steps you can take to prevent your electric vehicles from catching fire. Start by buying your products from reputable brands, avoid overcharging your battery, and keep your scooter or e-bike in a place with optimal temperatures.

Also, always take good care of your scooter and follow manufacturers instructions on maintenance and servicing. 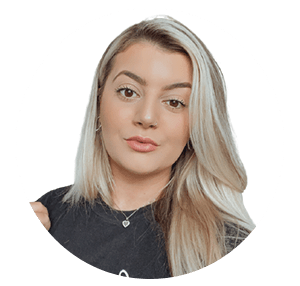