How would we describe the Booster V? Built like a beast, ultra-portable and fairly fast.

We’re now on the fifth generation of S2 scooters (where did the time go?), and they keep getting better and better. Like its brothers the S+ and S, the Booster V is an ultra-portable powerhouse that’s designed to deliver comfortable commuting miles. Riders across the world have racked up thousands of miles on these, so we know they’re built to last. 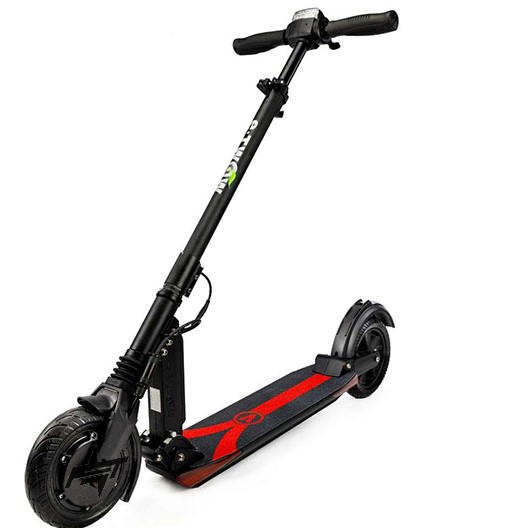 It may not be the most exciting thing to look like, but it’s high-quality and low-maintenance with a quality motor. A decent Samsung battery and airless tyres round out the package. A top speed of (almost) 40km/h and a max distance of 35km, make this a stand-out scooter for those who want a durable daily ride.

On paper, it stacks up against the best, but how did it do on review? Check out our in-depth test to find out.

Have a comprehensive visual feel of the Booster V in this YouTube review video.

Good for thousands of miles

Lack of grip from the small tyres

Small deck may be too small for larger riders

Brakes could be better

Does the world need another commuter scooter? When it’s as good as the Booster V then yes.

The commuter electric scooter market is crowded and more competitive than ever, with some great value deals. The Booster V is up there, boasting some serious paper specs and real-world performance.

E-twow has used some quality components, including a heavy-duty 36V Samsung battery that’s good for hundreds of cycles.

Paired with the 500w front hub motor (with max output of 800W), you’ll hit top speeds of over 40km/h. Sure, you’re not tearing it up like you would on a super-scooter, but at this price (under £800 retail) you can’t complain.

Handling is responsive, quick and impressive. That’s in no small part due to the tiny 13cm handlebars, small wheels and tiny deck.

Where this scooter stands out is the build quality. This thing is tough, and good for thousands of miles. Folded up, it’s light at 11kg too. Airless tyres mean that maintenance is almost non-existent too.

So, is it the ultimate commuter companion? Not quite.

What hold this scooter back are some pretty average tyres, sub-par suspension and budget brakes that can’t match the performance. In fact, braking distances are long which isn’t ideal when you’re riding in traffic or on busy roads.

The pay-off here is portability for comfort.

Overall, we would be happy to add this scooter to our stable and have no concerns about racking up mega miles. Just look where you’re going and be gentle on the brakes.

The Booster V can be pushed hard. For an ultra-portable, it’s fast. E-twow claims you can l hit speeds of 40km/h. Although we never achieved that, we managed to get close (38 km/h to be precise).

It’s faster than a rental scooter, or the world’s biggest seller, the Xiaomi M365.

The 500W motor has a peak power output of 800W, which stacks up well. Acceleration is quick (more on that later), with the front-hub motor pulling you along rather than pushing you from the rear.

We were concerned this slimline scooter would struggle on the hills, but it performed well. OK, so it wasn’t fast up a 7% incline, but we didn’t suffer the embarrassment of having to jump off and walk.

The range was a reasonable 20km, which was enough for our ride to and from work.

On paper, it’s nothing extraordinary, but the Booster V’s real selling point is its ability to clock up long miles. In fact, some riders have done thousands of miles on this (and previous versions) of E-twow’s S model scooters.

If you’re looking for reasonable power, and long-term performance then the Booster V should be somewhere near the top of your list. 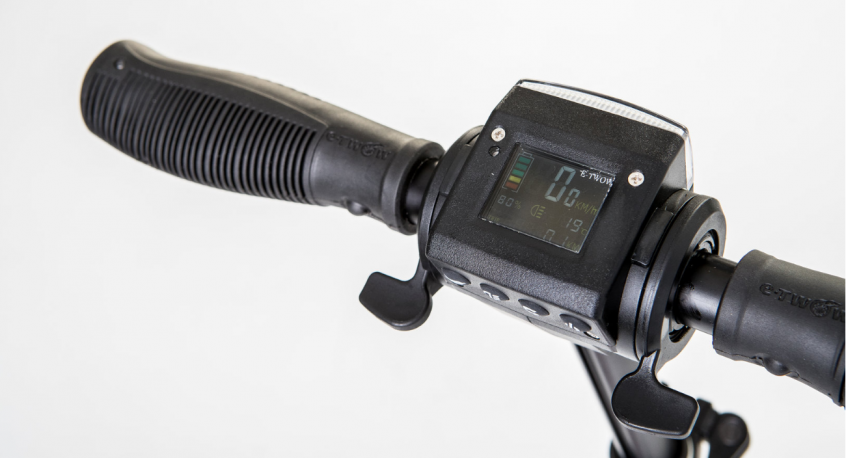 E-Twow claims you can hit 40km/h, but we got slightly less than this in the real-world. (OK, so we’re pushing close to 125kg weight limit with a fully-loaded rucksack on.) Lighter riders going downhill shouldn’t struggle to hit 40km/h.

A twist on the throttle saw a reasonable burst of acceleration, taking a shade over 10 seconds to get us up to 20mph.

It’s not fast, but it’s not slow either.

One of the biggest selling points of the E-twow’s S range is the quick charging time. The Samsung battery pack can be fully recharged within 3-4 hours with the fast charger (included).

A max 20km distance is about average for a mid-price scooter. It proved to be enough for our daily commute, with a little left over if we needed to stop at the shops. This is all thanks to Samsung’s 378-watt hour lithium-ion battery pack that’s at the heart of the S series.

The 500W motor is located in the front hub, as it is in all S series scooters. The motor can kick out a peak of 800W, which certainly felt enough. The light weight of the Booster V means it’s more than ample, and didn’t struggle much up the slopes.

This is the fifth generation of E-Twow’s S scooters and they keep getting better. We’ve mentioned our issues with the tyres, brakes and suspension but if you deal with that, you’ll get a scooter that’s built to last.

This is a well-built scooter packed with quality components. The cabling is neat and hidden away.

We put the Booster V‘s front and rear coil spring suspension through its paces and it smoother out most lumps and bumps. As we’ll see, ride quality could be better but that’s not entirely the fault of the suspension.

Overall, it was OK, but is firmly designed for city streets. We don’t recommend riding this off-road for any length of time.

This is where the Booster V can start to let you down. While the suspension is reasonable, the small wheels and airless tyres can make long rides a little uncomfortable. In the wet and rain, it could be described as dangerous, with the tyres offering little grip.

The Booster V handles really well, because of its narrow handlebars, slim deck and light weight. We managed to throw this thing around and had a lot of fun.

If you’re a little larger, then thing twice about the Booster V. The 13cm handlebars and small deck mean mounting this scooter can be a challenge for you.

Sadly, the brakes on the Booster V let the package down. At the front is a regen brake which delivers average stopping power. At the back is a foot operated mechanical brake.

On most scooters, a tug on the front brake should be enough, but we found it necessary to operate both brakes to slow the Booster V. Even then, braking performance was lacklustre.

There’s so much to like with this scooter, but the brakes definitely offer room for improvement. Let’s hope they sort this for Series 6.

The Booster V is a perfect portable scooter. It’s lightweight at 11kg, and the slimline bars and deck means its super compact when folded down.

There’s a durable nylon handle that makes it easy to carry up and down stairs and is small enough to be stowed away in small spaces. The foot-operated folding mechanism is easy to manage and can be done in seconds which is great if you’re late for a train or bus (like we always are).

The portability matched with the performance make this scooter stand out (if you can live with the budget brakes).

The Booster V isn’t water resistant at all, so don’t ride it in the wet. If you do, you could find your 1-year warranty (6 months for battery) worthless. A little water on the road won’t do too much harm but avoid puddles if you want to stay moving.

The front LED and rear taillight are usable, but average. If you’re riding in the dark, stick another set of lights on for extra visibility. This may be easier than it sounds, as the handlebars themselves are very narrow. We advise wearing a helmet light and high-vis jacket if you’re worried.

The polyurethane tyres are airless which is pretty standard for a commuter scooter. They’re maintenance free which is great, but the ride can feel harsh, and they can struggle for grip if the road is damp.

As we’ve mentioned, braking isn’t brilliant, so ride within your limits until you get to know the Booster V.

It’s not a huge problem, as this scooter is designed for urban riding, but we would urge caution.

The Booster V deck is super skinny (42cmx 15cm approximately) which is ideal for portability but means you may have to sacrifice a little comfort. We found it stable enough, with a reasonable ground clearance (7.6cm), but we wouldn’t want to take this off road or off many kerbs.

There are reflectors either side that add extra visibility, and the grippy surface kept us reassuringly stable as we were riding. 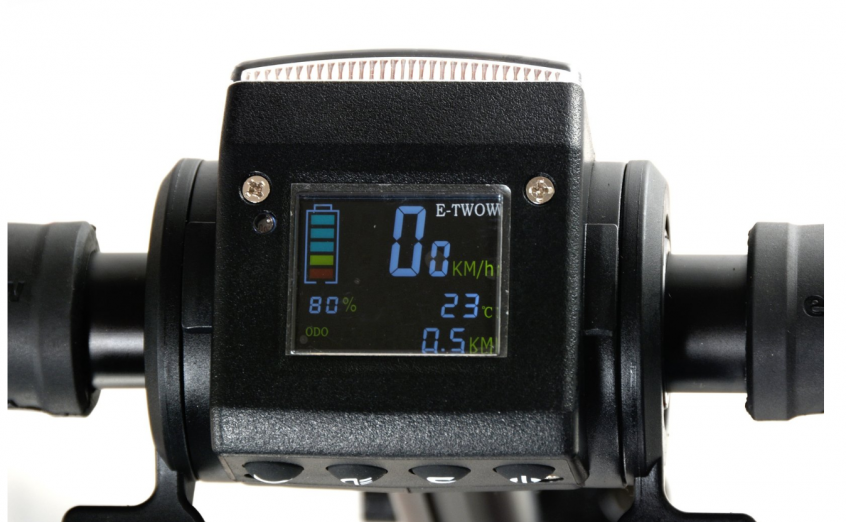 As we’ve mentioned before, riders have clocked up thousands of miles on S scooters, and we have no doubts that the Booster V will be the same.

There is little here to worry about. Even the puncture-protected airless tyres should last a couple of years without needing to be replaced.

Replacement parts are easy to get hold of too, which is a bonus.

There’s little to go wrong on the Booster V, and little that you’ll need to do either. The scooter is pretty much maintenance free, just keep it clean and check the tyres for wear and tear.

There are no manufacturing issues with this model that we’re aware of. We’ve talked about our issues with the brakes, suspension and tyres, so we won’t mention them again.

In the past, some owners have had controller issues, but it seems these have all been replaced under warranty and the underlying issues sorted.

We’re always listening to the experiences of other rides, and if any issues emerge, you can read about them here first.

There are loads of aftermarket official E-Twow accessories, including phone holders, fingerprint sensor lockers and trolley bags. Our favourite is the shoulder strap. It’s particularly useful for lugging the scooter up flights of stairs. 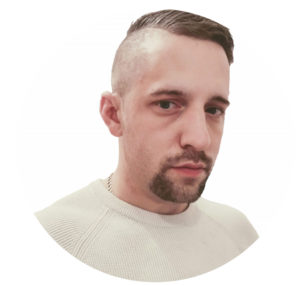 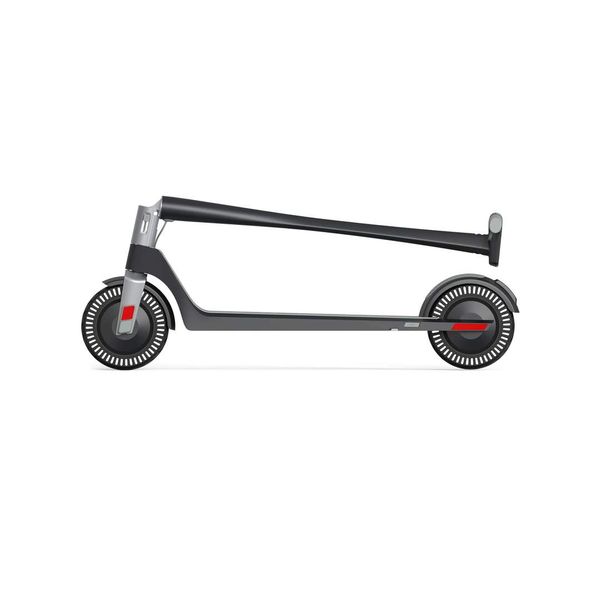 Save $370 on Scooter Rentals from Unagi!

Get your own Unagi E500 Scooter for just $39 a month, get a FREE month subscription, Free Upgrades & Free Satchel. Fast delivery to your door!.